From Olympus Entertainment Wiki
Jump to: navigation, search
"The APD is meant to be a peacekeeping force that focuses on eliminating criminal activity while promoting comradery within it's ranks." ThatNerdyGuy

What is the APD?

The APD is a whitelisted faction that operates as a peacekeeping force that enforces the laws of Altis and seeks to assist the civilian population. The key responsibilities of being an APD Officer are to uphold and enforce the law.

The APD is also responsible for protecting the Federal Reserve, Blackwater Armory, and the Altis Penitentiary. The APD is obligated to respond to these Federal Events if civilians attempt to break into them to ensure the high value items do not fall into rebel hands.

The APD consists of a ranking structure that Officers can progress through, all of which come with additional equipment, powers and duties.

Applying to the APD

Do you want to join the ranks of the APD? If you think you have what it takes to be an APD Officer, please read the following information.

The minimum requirements to become an APD Officer:

If you think you have what it takes to be an APD Officer, please go to the Olympus Website, select support, and submit an APD Application

For further information regarding applying to the APD, please read the following post

Please read through the following documents in preparation for your APD Deputy Test.

Patrol Officers of the Week

5 Patrol officers are recognized every week for managing to achieve the highest in-game playtime out of all Patrol Officers on the APD. The Patrol officers will be rewarded with in-game rewards and a Teamspeak tag recognizing their achievements.

How is the POTW selected?

The following factors are taken into consideration when selecting the POTW:

Patrol officers of the week will be permitted to use Corporal level gear for the duration of the week. This gear includes:

All rewards may be utilized in-game by the Patrol Officers of the week from the Sunday they appear on the Top APD Times Post until the following Sunday at 00:00 EST.

Corporal of the Month 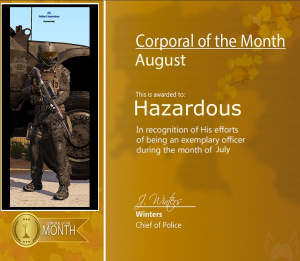 Corporal of the Month Certificate signed by Chief of Police Winters

A corporal is recognized every month for the exemplary demonstration of their duties. The corporal will be rewarded with the Teamspeak tag “Corporal of the Month” (COTM), a forum post recognizing their achievements, and access to staff sergeant gear for the month.

How is the COTM selected?

SAPD will reward a corporal each month, who performs their duties in an exemplary manner. Corporal of the Month is intended to award officers. While also providing an additional incentive to those who strive to achieve.

The following factors are taken into consideration when selecting the COTM:

The Corporal of the Month will be permitted to utilize a staff sergeant whitelist for the month. This gear includes:

The COTM will also receive a TeamSpeak 3 icon, labelled “Corporal of the Month,” for the month. The COTM will also be recognized for their hard work on the forums by SAPD, and will be issued a certificate signed by the Chief of Police.

All rewards may be utilized in-game by the Corporal of the Month from the point they are issued their Staff SGT whitelist until the 1st of the following month.

The Field Training Officer or “FTO” system is a way for deserving Corporals to be recognized for their accomplishments and determination to the APD, while being allowed to contribute to the APD on a broader scale than previously possible. These officers will be selected from Corporals applying for the position. While holding the position, they are expected to execute actions to fulfill their responsibilities including: training deputies, mentoring new APD members, and helping to prepare subordinates for tests by answering questions. Keep in mind an FTO can be relieved of his/her duties at any time, for any reason. Should this occur, the officer in question would normally return to the rank of Corporal.

Corporals may utilize the APD undercover system with a maximum of 3 APD undercover officers that can conduct operations at a time, and have access to civilian vehicles.

What is the Undercover System?

Corporals can go undercover on the Island of Altis. As undercover officers, they have the ability to disguise themselves as civilians to conduct covert operations and assist uniformed APD officers. Undercover officers must follow the APD Handbook and also have additional rules they have to follow. These rules can be found here.

The HQ overlooked by massive castle ruins with the goddess statue in the distance.

The staging point for the APD during federal reserve robberies.

The staging point for APD during jailbreaks.

The most mediocre HQ on the map.

The closest HQ to the war zone.

The staging point for APD during Blackwater Armory robberies.

This HQ is the furthest North compared to all other HQs.